Many are the comments, news and opinions that increasingly resonate about the risks to people’s health from exposure to blue light, this term represents the risk of actual eye damage and its influence on people’s well-being.

The blue light hazard is used only when light is considered a risk to the eye, due to direct exposure to bright sources such as the sun.

The word “blue” is included in the definition because the risk of photochemical damage depends on the wavelength, taking into account the maximum in the blue range of the Radiation Protection spectrum, (ICNIRP), a wavelength-dependent function of weight.

There is no evidence of any adverse health effects in humans from occasional exposure to optical radiation within the above exposure limits.

The most dangerous proportion of blue light is found in incandescent and LED lamps used for general lighting.

According to the studies, is there a danger to health? 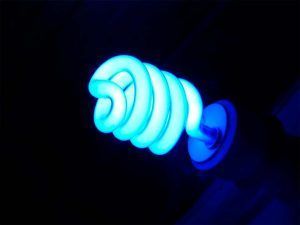 Several experimental studies have shown that there is no danger or risk of exposure to blue light as long as it does not exceed the conditions set by regulations. In addition, exposure levels are often lower than those experienced when looking at blue sky.

Thus, several experimental studies have been conducted to assess how harmful high levels of exposure to white light are to health.

It is essential to indicate that a white light source that emits blue light at levels that are almost borderline produces a bright effect, causing glare and that are installed in unusual environments. Taking into account that psychologically lighting with a high color temperature is perceived by most people as unpleasant and uncomfortable, especially in domestic lighting.

It is known that during a normal lighting situation we experience transient exposures to high levels of light, and we may have many such exposures per day. However, the accumulation of these exposures during the day will not result in exceeding acceptable exposure limits.

The CIE considers that BLH is not important for white light sources used in general lighting, even those that are enriched in the blue spectrum; however, caution is advised for possible circumstances that may occur over many days, if continuous exposure to optical radiation approaches the BLH exposure limit. In fact, that level of exposure should be avoided. Such exposure is unlikely for white light sources, but may be possible with sources that emit mainly blue light.

It should also be taken into account that the use of sources emitting mainly blue light may be harmful to children. Even if the BLH limit is not exceeded, such sources may be too bright for young people.

For this reason, the use of blue indicator or signal lamps is not recommended for devices that may be exposed to children. When blue light sources are used in such objects or devices, the blue light should be reduced by a factor of 10.